What is Pho Viet Nam ?

Questions › Category: Food › What is Pho Viet Nam ?
3 Vote Up Vote Down

WHAT IS THE DISTINCTIVE TASTE OF HÀ NỘI PHỞ?

Phở is a soup original to our people and a delicious dish eaten in both the morning and evening. Hà Nội phở has an extraordinary taste arising from its clean broth and fresh noodles; these qualities distinguish it from phở served elsewhere. Some restaurants in Hồ Chí Minh City has signs saying “Phở Hà Nội” but their dishes don’t include the condiments served in Hà Nội.

Foreigners love Phở, whether beef or chicken. Japanese tourists are great enthusiasts; some of them order two or three bowls in a row. Kiyomi Tsujimoto, president of the Peace Boat Movement, was reminiscing about his visit to Vietnam.

“I pine for the taste of phở”, he exclaimed.

Because of my passion for phở, no matter the country I happen to be visiting, I always look for a Vietnamese restaurant where I can savour a bowl of phở and compare it with phở served at home.

I remember my first visit to Paris in the winter of 1989. Cold and hungry, I made my way to the Thirteenth Arrondissement because of the reputation of its Vietnamese and Chinese restaurants. I’d heard their dishes were even more tasty than those served in Vietnam. Given the large number of shops, I chose the restaurant with the most customers, believing it would have the best food. As soon as I took my seat, I ordered a bowl of phở with scalded beef.

Alas, I failed to bring to my mouth the taste of Hà Nội Phở even though the steaming bowl contained every required ingredient: meat, hot pepper, lemon juice, mùi aromatic herbs, and cinnamon. However, the beef had been kept in a freezer and was rubbery, the rice noodles were a bit too rich, the aromatic leaves were large and green but had no flavour, and, as for the broth – well, its artificial succulence from the powdered seasoning was sickening. A Hà Nội gourmet has told me a secret of Chinese caterers: an ingredient that gives broth the taste of bone marrow without recourse to powdered seasoning. Nevertheless, something particular to real phở was missing, a flavour that perhaps emanates from the interplay between thảo quả (cardamom) and láng mint.

I also went in search of phở served by local Vietnamese-owned restaurants in other French cities – Grenoble, Lyon, Besancon, Nice. I now believe that Vietnamese expatriates go to these restaurants more to experience a certain gastronomic sensation than to draw a satisfactory comparison between “western phở” and the soup served in Hà Nội or Sài Gòn.

The first time I visited Hamburg, I was shivering with could. I stayed there three days before driving on to Nuremberg and Munich. Never have I felt the sting of cold and hunger more acutely than during those seven days. Never have I craved so much the smell of a steaming hot bowl of phở – even the kind served in the Thirteenth Arrondissement of Paris! The mere thought of it made my heart miss a beat. I arrived in Copenhagen around nine in the evening. The city was deserted. Harassed by the demon, phở, I searched the telephone directory before ferreting out the address of Vietnamese restaurant some thirty kilometers from my hotel.

Every time I return to Sài Gòn, I order a bowl of phở. It comes steaming hot yet has a dull flavor. I must say in all sincerity that Sài Gòn phở is not authentic except in some restaurants kept by northerners. In truth, the phở tradition is even fading in Hà Nội. The taste of the clear broth, with the delicate flavour of sá sung, cardamom, cinnamon, ginger, and snippets of meat from carefully selected cuts, the soft noodles made from newly harvested rice, the mauve leaves of láng mint – all these elements are part of a legacy of refinement and harmony from out forefathers.

0 Vote Up Vote Down 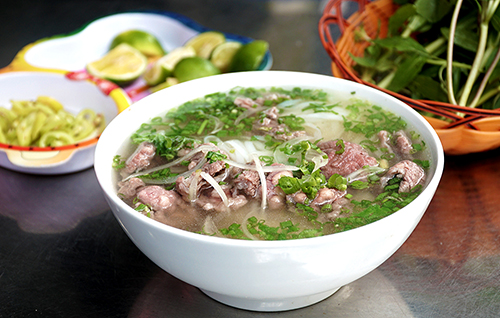